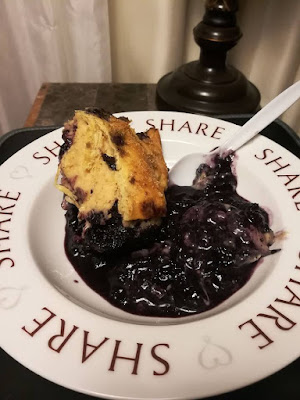 Need a delicious twist on a southern favorite?!  Try this recipe!

Cobbler is by far one of the simplest and delicious desserts out there!  It wasn't until I went to school at Western Kentucky University that I learned that cobbler has different roots in South Central Kentucky than in my Western Kentucky roots.  In South Central Kentucky, cobbler is common for breakfast while in Western Kentucky, it's typically dessert.  I grew up in Muhlenberg County in Western Kentucky in a town so small and rural that you could blink and be on the other side of town.
Bremen was the name of my tiny community, and everyone knew everyone.  It was a pretty good guess that I was probably related to them with our rich ancestry in the community.  No not the kissing cousins thing!  But everyone somewhere was connected to my family whether it was blood, going to church, or just a long family friend.  Thinking back to those times are so special to me!

Watermelon[/caption]
The victory garden wasn't her only pride and joy.  She loved picking berries and greens that people had left over from the seasons.  There were several times we'd pile up 5 gallon buckets and empty gallon ice cream buckets to go pick strawberries, mustard greens, collards, sometimes kale greens, turnips and turnip greens, nuts, etc.  Like I said, we ate really well when I was little.
Back to cobbler, my great grandmother and my grandmother (her daughter in law) used to pick so many blackberries on my grandparents farm.  My grandfather and grandmother were cattle farmers and also raised quarter horses.  They lived on 44 acres with pear trees, blackberry bushes, paw paws, etc.
I can remember eating those sweet and tart blackberries right off the bush!  There was a cut or two on my fingers from the brambles (no thorn-less here!). But you can bet there would be gallons and gallons of berries to eat, turn into delicious jams & jellies, & COBBLER!
My great grandmother made so many varieties of desserts in my life.  I can't honestly count all the delicious sweets that she made.  But her cobbler is what I miss eating the most.  I miss her everyday.


What inspired my new twist?

When I made this cobbler, I honestly didn't know how it would turn out.  I'll be the first one to tell anyone that if it tastes good, it's because God did it.  How?  Let's just say that when I stress cooking, I pray...A LOT!  And if it turned out delicious, it's because God willed it.  This cobbler could have been horrible, tasteless and overly sugary.  There would be no way for me to really know because I kicked gluten out of my life because of indigestion.  And I kicked all refined sugars out of my life because I have such a high risk of diabetes in my family (both my parents and all of my aunts and uncles are diabetic to the best of my knowledge!).  So if I have these weird eating/dietary habits, why did I make this thing?!
If you're interested in joining our Just Add Faith Facebook Group, click here!
Like any good recipe, I was in a pinch, and my husband was craving something sweet.  He has a sugar tooth like no one I have ever seen, and he's hard pressed to have something most nights (if not every night).  My refrigerator and pantry had a few things, but I was on the brink of needing a grocery run.  I scoured my pantry, refrigerator, cabinets, and deep freezer to find the solution for my hubby's sweet tooth.
I found 2 cans of biscuits that I had in my refrigerator.  When I was in college, my great grandmother taught me a quick trick to make cobbler in a pinch.  She said, "Grab a can or two of biscuits, a can of fruit.  Peaches usually work well.  And grab a stick of butter or margarine.  Put it all in a pan, and you have Lazy Woman Pie!"  I chuckle thinking about her saying that.  But she was worried about me not having something good to eat while I was at school and living on canned food and noodles.
Back to modern day, I also found a can of crescent rolls and a box of cream cheese that my mom gave me a few days before from a recipe she didn't have time to make.  I looked in my pantry and found some light brown sugar.  And scouring around thinking about making cinnamon rolls (or the poor man's variety), I found a bag of frozen blueberries.  BINGO!  Maybe I could make some kind of cobbler.
I started putting the items together, and it peaked my husband's interests.  "What are you going to make?" he asked curiously.
"Hmmm,"  I began, "I think I have the makings of a cobbler here, but I am not sure.  Is that okay for dessert?"
"That sounds good," he approved.  "Are you going to make a new video for your blog?"
Honestly, I hadn't thought about it.  I had made a couple of videos, but I didn't really get a lot of feedback good or bad.  And I am a parenting blogger trying to transition into parent coaching.  So I wasn't really thinking about making a video.  After talking more with my husband, he convinced me to make a video at least to help out a friend or two who might need a quick recipe.  I grabbed my phone and asked my husband to help me film.
Join our Facebook Page to see our latest articles and happenings at Just Add That.  Like our page by clicking here!

As I said before, I wasn't really sold on doing the video.  I thought it would be better to have the footage and make something later if I wanted than to have none.  My husband started with us taking pictures of the biscuits lining the bottom of a greased pan.  Yeah, pretty exciting stuff.  Don't lie.  You're really jealous!  Ha ha ha.

After those pictures, we started filming the frozen berries cooking on the stove.  After the berries were thawed, I mashed them with a potato masher to make them juicier and to help the brown sugar to thicken the berries.  I added one cup.  And after waiting for the berries to thicken, I realized I needed another cup of brown sugar.  I was beginning to worry that this was going to be too much sweet into the recipe.  Prayer was my greatest hope.  So I started praying, "Lord, please let this taste good.  I hope that I don't mess this up.  If anyone can make this taste fantastic, it'll be you!  Amen."  I decided to have faith, and this gave me the confidence to keep on going with the recipe.


I wasn't sure what to do with the cream cheese.  I thought about adding chunks in it, but I decided that maybe it wouldn't melt properly and spread all over like I had hoped.  Then I remembered my great grandmother's Lazy Woman's Pie called for butter or margarine!  I hadn't thought about that.  I looked in the refrigerator, and I usually use unsalted butter.  It tastes better in most recipes and has more flavor than margarine.  However, the last time I had gone to the store, the butter was so expensive that I broke down and bought margarine.  Rats.  But I have redone this recipe, and I can ASSURE YOU that real butter is the way to go for better flavor!
My brain started turning.  How am I going to work this?  Chunks of margarine here and there with hunks of cream cheese?  That sounded awful and messy.  I thought, what if I creamed them together like making homemade cake frosting?  It was a thought, and I decided to try it.

I creamed the two together, and I liked the look.  But I wasn't happy with the two together.  I wondered if I should dare add more brown sugar or just leave it alone.  The brown sugar would give it a more icing quality.  Maybe this would be too rich and sugary to even eat.  I prayed again.  Only God could fix my worries and concerns.  After careful thought and prayer, I opted to do the brown sugar.  If it was too much, I would know, and I would fix it the next recipe (if I dared do this again).

I baked this Frankenstein-ish creation in the oven.  My husband said, "14 seems like the magic number.  Try 14 minutes."  I set the timer per my husband's request and checked the cobbler, however, the cobbler was still doughy in the middle.  This required more prayer.  Maybe 5 more minutes might be enough, and it was!

I wouldn't post all of this without the actual recipe.  So without further waiting, here it is!

Preheat oven to 375°.
Grease an, 8 x 8 x 2 in. baking pan with non stick spray (or butter, optional).  Coat the bottom with can of biscuits.  Set aside
In a 10 in. skillet, add the blueberries still frozen.  Cook on medium heat until the berries feel soft.  Mash with a potato masher (or fork) until the berries are juicy and soft.  Add 2 cups of light brown sugar and continue to cook until thick like the consistency of hot jelly.  Pour on top of the biscuits and set aside.
In a separate bowl, combine 1 package of cream cheese, 1 stick of unsalted butter, and 1 cup of light brown sugar.  Cream together using a hand mixer (or a fork if you do not have a mixer) until the mixture is smooth.   Pour mixture on top of the biscuits and blueberries.  Spread with a fork for a more evenly coating.
Open the crescent rolls and place on top of the almost completed cobbler.  Cover as many bare spots as possible.  Sprinkle remaining brown sugar on top if you choose for a sweeter, crispier crust.
Bake in the oven for 20 minutes or until golden brown.  Remove and allow to cool 10 minutes before serving. 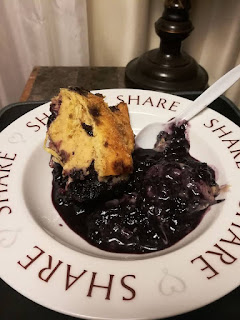 Despite my insecurities in making this cobbler, it is now one of my top requested recipes.  My husband and kids absolutely loved it.  I have tried making it with other fruit, and it has had the same success.  My mother in law is a master baker, and her only suggestion in improving it is, if you like a juicier cobbler, maybe don't add as much sugar since the bread naturally soaks up so much of the juice.  For a thicker cobbler, let it sit longer when it cools.
I hope you enjoy this recipe as much as I had making it.  While there were lots of hiccups and concerns along the way, God persevered!  It's amazing what having a little sugar, some dough and a whole lot of faith can make in a pinch
For another great recipe, be sure to try this easy Vanilla-Caramel & Cream Cheese French Toast Casserole.

Here's my final video for you to view. 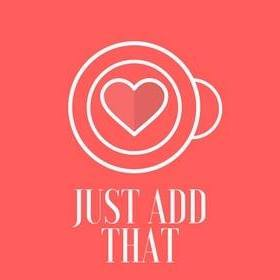 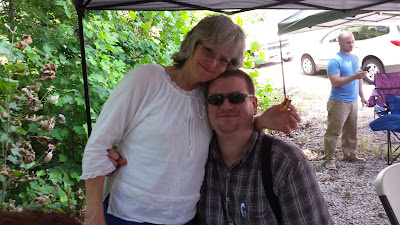